The Memories on a Bookshelf

Many bibliophiles have books which always remind them of a particular place or time. As I moved house recently, packing up then unpacking my shelves, I was reminded of some of mine, and since this is my first blog post since joining the team, I thought it would be a good introduction! I could list […]

A love of letters – Guest Post by Menna van Praag

Dear Readers, We are delighted to welcome author Menna van Praag onto the A&B blog today. If you share a passion for letters and stationery, read on. For the rest of April, Menna’s latest letter writing-inspired novel, The Lost Art of Letter Writing, is just 99p on Kindle UK. Why not treat yourself! Yours sincerely, […]

From Heroic Protectors to ‘Facebook Mums’: the Greatest Literary Mothers of All Time

Agatha Christie once wrote that ‘A mother’s love for her child is like nothing else in the world. It knows no law, no pity, it dates all things and crushes down remorselessly all that stands in its path.’ Across time, this powerful and boundless maternal love that Christie describes has been captured by writers in […] 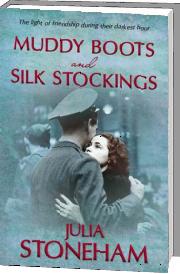 The Cinderella Service on iPlayer

Author Julia Stoneham was inspired to write Muddy Boots and Silk Stockings after writing the radio series The Cinderella Service. We’re very excited that the BBC have recently aired the series again and you can listen to it on iPlayer now! You can find the first episode (of three) here.       Devon, England, 1943: Alice […]

He Kills Because He Cares: Guest Post from author Peter Laws

We’re delighted to welcome author Peter Laws to the A&B blog for a glimpse inside the mind of the murderer… There are lots of ways to dispatch somebody. Guns and knives are incredibly popular, and efficient too, but let’s be honest: they’re a little passé. You’ve seen (or read) them a thousand times. Dropping a […]

We’re delighted to welcome to the blog author David Hingley, especially as it is publication day for the paperback edition of his debut historical crime novel Birthright (currently a Book of the Month with £2 off!) and its follow-up Puritan in hardback. If you’re in the mood for some adventure, travel and mystery, why not join David’s heroine Mercia Blakewood now… It […]

Writing about the past – guest post from author June Tate

We’re delighted to welcome June Tate onto the blog today to give us some insight into how she constructs an authentic sense of period in her novels. To coincide with this post we’re also offering her ebooks The Reluctant Sinner, Born to Dance, Brides of War and The Docklands Girls at the special price of […]

You can’t judge a book by its cover – especially if you’re a robot.

The robots are going to rise up and take our jobs, yes? Well no, maybe not. At least when it comes to book cover design. I was looking through The Guardian‘s book section and came across an article about an algorithm created to predict a book’s genre by its cover. Designed by academics at Kyushu University […]

And behind door number 1 is…

Does anyone else think it’s beginning to feel a lot like Christmas? I don’t usually get the urge to deck the halls quite so early, but I’m going to blame the surge in ‘grown-up’ advent calendars that I’ve seen around recently. Tea, make-up, gin*: there’s something for everyone. And then I spotted this rather jolly […]

Today (10th November), renowned children’s author Michael Morpurgo will be presented with the J. M. Barrie Award for his contribution to children’s literature. Having written children’s literature since the 1970s, Morpurgo’s work continues to inspire new generations of young readers. Myself, I remember reading The Butterfly Lion while at primary school; a beautiful book about […]

There’s an election coming up in America, maybe you’ve seen a bit about it in the news? Yes, well, the less said about that I think the better. I have certainly needed a bit of distraction from my wails of ‘What is the world coming to?’ and have done what I do best: stick my […]

The creepiest place on the internet

The internet is a crazy place, full of cat memes, avocado on toast and, it seems, excellent scary stories. Courtesy of Emerald Street‘s latest newsletter,  I came across a Reddit forum called NoSleep where a community of horror writers keep the tradition of ghost stories alive. There are strict rules about what tales can be published: no […]

Like many others, the news that a beloved book is to be made into a feature-length film provokes a mixed reaction: torn between excitement at seeing the characters brought to life and a lingering dread of what will inevitably be changed. Recent months have seen a string of literary adaptations from The Girl with all […]

I am always listening to the radio. I listen in the mornings while dragging myself out of bed and into the waking world. I listen to one of my favourite radio show’s podcasts while travelling to work. I listen while cooking, while cleaning and, far too often, while not sleeping in the wee hours. So […]

Technology never ceases to amazes me. Especially technology that helps revive a struggling bookshop. The Librairie des Puf, a bookshop in the Latin quarter of Paris, is a strange kind of place because there are no books. Instead, there are tablets and an Espresso Book Machine; the combination of the two lets you print a book of […]

To celebrate the release of Mary-Rose MacColl’s latest novel, Swimming Home, in ebook, we’re delighted to share the author’s writing about her visit to Kenwood Ladies’ Pond on Hampstead Heath this summer. Come on in – the water’s lovely! The water will be cold. While it’s summer and what Londoners call a hot day, the nights are […]

Are You a Little Miss Wise or a Mr Perfect?

To celebrate the 45th anniversary of the Mr Men and Little Miss books, four brand new characters have been created by Adam Hargreaves, son of original author Roger Hargreaves, who created the series back in 1971. As children, my brother and I were obsessed with this collection and constantly argued about which characters were the […]

Fiona Sussman joins us on the A&B blog to discuss her ‘second child’, The Last Time We Spoke, and the family resemblances with her debut Shifting Colours. We’re running a giveaway right now for four sets of signed copies for UK entrants. Enter at the bottom of the blog post – good luck! At first […]

‘Beam me up, Scotty’: the novel as transport to another world – guest post by Sarah Hawkswood

As we’re now in the season of holiday reading, we’d like to invite you to getaway for a moment with author Sarah Hawkswood’s thoughts on escaping into a good book. Sarah’s novel Ordeal by Fire is published 22nd September and is available to pre-order now. As a reader, I have always sought books which enable […]

This month, Steven Spielberg’s cinematic re-imagining of one of my favourite childhood books was released: Roald Dahl’s The BFG. My excitement is only equalled by the release of the Harry Potter script book (pre-ordered it). But before I go and see the BFG on screen, I thought best to revisit the book itself. To my utter […]

Audio books are big business these days. It’s the fastest growing part of our industry and the number of audio books produced  has doubled since just 2013*. There are so many situations recently where they have proved their worth to me. My niece is already devouring Roald Dahl on CD. Our editor Sophie has described […]