Apprentices in WWII: A Guest Post from Jacqueline Winspear

Today we’re welcoming Jacqueline Winspear to the blog! Jacqueline is the author of the exciting Maisie Dobbs series, which is set in the aftermath of WWI. Her latest novel in the series, To Die But Once, is released this month.

Over to you, Jacqueline! 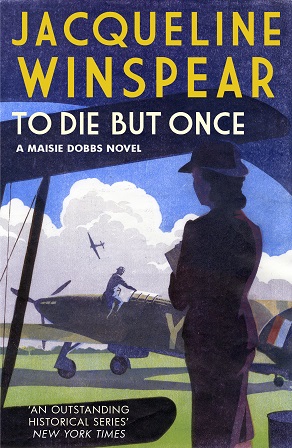 To Die But Once opens in May 1940. The British expeditionary force is at great risk on the other side of the English Channel, and Maisie’s friend Priscilla is worried about her son, who has joined the RAF. But as the story opens, another young man—the 15-year-old son of a local pub landlord—becomes the focus of Maisie’s concerns. The lad is apprenticed to a firm of painters and decorators that has landed a big government contract to paint the buildings on airfields throughout Britain with fire retardant, and the young man is part of a crew of workmen going from one military airfield to the next, staying in lodgings along the way. His parents have become worried because he seems not to be his usual self—and he’s missed a promised telephone call to let them know he’s well. They are particularly concerned because he’s been suffering pounding headaches. Maisie has seen the lad grow up and has always liked his sunny disposition—so she is determined to find out what has been happening to him.

The main story underpinning To Die But Once—that of the young apprentice—was inspired by my father’s experiences during the early part of the war. Dad was fourteen in 1940, but had left school earlier because he was tapped to be a “runner” between ARP (Air Raid Precautions) and military posts in south London. The ARP men went around to the schools, picking out the best sprinters for the job—and Dad was the fastest runner in the school. But having run though burning bomb-sites during the early part of the Blitz, he must have been relieved when he began an apprenticeship later in 1940, soon after he turned fourteen—the age at which you started full-time work in those days. I knew my father had a job that took him from place to place around the country before he joined the army, but I didn’t really know the details until his last weeks. During those hours in the hospice, when we’d watch his favorite TV shows, talk about a book he was reading, or discuss the news, Dad also told me stories of his childhood in London. It was a lovely, precious, yet bittersweet time. He also told me more about that job, and I became even more curious as he described his work to me, and what was involved in using a brand new type of emulsion to paint the buildings at military airfields around Britain. “It was amazing,” he said. “After we finished painting each building we had to test the surface, so we’d stand a line of four blowtorches right up against the wall, and let them run for three or four hours. The first time, well, we couldn’t believe our eyes—there was not a mark on the wall, no burn marks, no bubbling of the paint, nothing.” I was shocked and asked what the paint was called. “Oh, it didn’t have a name,” he replied. “Just a number.”

Many of those airfields were situated in southern England where much of To Die But Once is set, though the job took him all over the country. By coincidence, one of my cousins lives in a region where Dad was billeted for a while. It was when my cousin told me about the area’s links to the Bank of England during the war, that I knew a story was coming together.

My father’s apprenticeship was a “protected” position because he was involved in essential government work—if he chose to, he could have remained in that job for the duration of the war and avoided the armed forces completely. But by the age of 17 he’d had enough of going from place to place, so he gave in his notice. His employer told him he was a fool to even think about leaving, but he left anyway—and within one day of being at home, his enlistment papers had arrived. He was off to join the army.

My father died at age 85 from a serious blood disorder, and though the strain he was suffering from was termed “idiopathic”—there is no known cause—research has indicated that it is linked to toxin exposure. My father had no idea what was in the fire retardant he worked with for three years when he was little more than a boy, but he told me that the workers were not issued with special masks, or gloves or any of the protective clothing one would expect to use today. And when I put that together with his later work in the war—in the Royal Electrical and Mechanical Engineers (REME), he was assigned to “explosives” given his calm demeanor under pressure—and the possible toxins he was exposed to there, I can only conclude that we were lucky to have had him with us for so long.

Thank you Jacqueline for such a fascinating insight!

If you’ve been inspired to find out more, To Die But Once is available now: order your copy today.

One thought on “Apprentices in WWII: A Guest Post from Jacqueline Winspear”