Jealousy and Grief in ‘Look For Her’: Guest Post by Emily Winslow

Today we welcome Emily Winslow to the blog, to celebrate the release of her latest book, Look For Her, which comes out today! 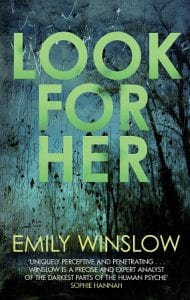 Look For Her begins with an incongruous jealousy. Anna Williams, in a counselling session with her therapist, admits to envying famous murdered teenager Annalise Wood. Not that she wishes to be dead; she wishes to be someone who would be missed that much if she were dead. The truth, of course, is that if Annalise Wood had lived, she would by now be middle-aged and likely ordinary, but Anna doesn’t think that far ahead. The Annalise she envies is forever young, stopped there by death and adored because of it. 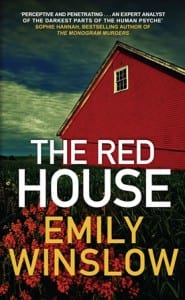 Anna is jealous of the perfection that Annalise achieved by being a famous victim and sometimes tells lies about having been a victim herself (not of murder, of course, but nearly). Being a victim is obviously terrible, but Anna feels she just can’t effectively compete for admiration, she just can’t be special enough for people to be amazed by her, so she decides to compete for pity instead. It’s not ideal, but it’s what she feels is within her reach.

The other big emotion in Look For Her is grief. Anna’s therapist Laurie Ambrose is both a grieving widow and a happy newlywed. Getting sucked into Anna’s drama forces her into conflict not only with her client and the police but with her grown children too. In the emotional chaos, her relationship with her second husband, and her memory of her first, anchor her, though she worries about how perhaps her feelings for the two of them compete.

Most of my books have both younger and older main characters: university age characters, full of potential that they long to make specific, and middle-aged characters, dealing with the choices they’ve made and the lives they’ve narrowed over their accumulated years. The young full of worry and hope, trying to live up to various ambitions; the middle-aged with compassion, experience, sometimes regret, and a feeling of “what now?”

I find that youth has a lot of structure to it, a list of clear aspirations that give clarity but also pressure. Middle age, if one has been lucky to not be too weighed down by difficult obligations, can have more freedom, but sometimes too much freedom can feel aimless. 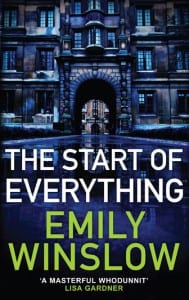 My detectives are only about ten years apart in age, but they too experience this dichotomy: Chloe Frohmann is newly married with a baby at home, and ambitious to climb the ladder at work for the first time; while Morris Keene is a long-time husband and father to a teenager, facing an imminently empty nest and forced by injury to reinvent his already established career.

All of my novels are told by multiple first-person narrators. The detectives are always among them, and the rest are those involved in the standalone cases explored in each book. In Look For Her, the narrators include Anna and Laurie, and another of Laurie’s clients, Hannah-Claire, who believes that she may have been Annalise Wood’s secret child, born the year before the murder, forty years ago. Laurie grew up in the shadow of the Annalise Wood case, and, though it’s a famous case, is surprised that two clients would have a fixation on it and that they would both share it with her. She begins to suspect that at least one of them chose her for a reason, and it turns out that she’s right to feel afraid.

Thanks Emily! You can order a copy of Look For Her from us here, or request it from your favourite bookshop. If you still need convincing, here’s what people are saying about the book:

“A match to the DNA found on a long-dead girl’s clothing makes the case look open and shut, but nothing is easy or simple, thanks to Winslow’s delightfully devious mind. Surprising and satisfying, you won’t be able to stop turning the pages of LOOK FOR HER.” – Karen Dionne, author of The Marsh King’s Daughter

“LOOK FOR HER ratchets up the tension while also offering moments of sheer grace. The cold case at the novel’s heart—and the chorus of voices obsessed with it—linger long after the last page is turned.” – Riley Sager, bestselling author of Final Girls