Writing What You Know & What You Don’t! Guest post with Sylvia Hunter

Today we’re excited to welcome Sylvia Hunter, author of The Midnight Queen trilogy to the blog. As the books are released in paperback this autumn, with book two, Lady of Magick, out today, Sylvia shares some of her inspiration for the series. 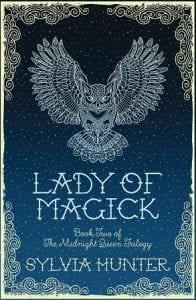 I was raised by multilingual people with linguistics degrees, so my interest in languages was probably inevitable, and over the years I’ve learned a few new languages myself. For a while, my brain reached for French almost as often as English, and there are still times when a term in some other language is on the tip of my tongue first. It’s given me a new set of lenses for viewing the world, and a new appreciation for the challenges of human communication. I also developed a fascination with all the other things that come along with languages: cultural and religious and class distinctions, the ways languages grow and shift and change, dialects’ and languages’ relationships to each other.

All of these experiences contributed to the world of The Midnight Queen. While the Midnight-verse version of Great Britain is less linguistically homogeneous than the real one, you should still be able to recognize how the characters’ language choices give insight into who they are.

I grew up Jewish (on my mum’s side) in a very, very not-Jewish neighbourhood. While my home town had at least three synagogues, I was the only Jewish child in my class, and usually one of only two or three in the whole school, until high school. Belonging to a minority religion gives you an interesting perspective on the culture of the majority; it can also make you watchful, wary, and, eventually, very tired of constantly explaining your strange, alien customs. In my case, it also made me voraciously curious about certain aspects of religious history, and some years ago I spent all of Yom Kippur reading a book called Constantine’s Sword: The Church and the Jews. The question from which the book begins is, What if Constantine, in Christianizing the Roman Empire, had emphasized the life of Jesus rather than his death?

In the Midnight-verse, I’ve taken that question several steps further, and asked, What if Christianity never really took off?

3. On Music and Mental Health

As I’ve written about elsewhere [warning: spoilers], music – specifically choral singing – has profoundly shaped my life. Because most of my musical training has been practical rather than theoretical, I often don’t have the vocabulary to articulate my emotional interactions with specific musical experiences – but I do know that when I don’t have people to sing with, my life is immeasurably poorer.

Perhaps more than any other aspect of the Midnight-verse, the role of music in the characters’ lives is based, in weird and not-fully-explicable ways, on my own life. If you’ve ever had an experience like my own experiences of choral singing – of co-creating something beautiful, whether artistic or scientific or practical or intellectual – then I hope some of what I’ve written will resonate with you.

4. On Academia as a Way of Life

I’m a faculty brat; as a child, I was surrounded by adults who made their livings as university professors, librarians, teachers, researchers. I didn’t end up following that path myself, but my work, you may not be particularly surprised to learn, has involved full-time wrangling of academic historians, teacher educators, and researchers in applied linguistics. For the past twenty-something years, I’ve been working on the periphery of the academic world, without ever being fully part of it: you can take the girl out of academia, but you can’t take academia out of the girl…

If you’ve never spent time with professors, some of the characters in The Midnight Queen may strike you as somewhat over the top. I can only assure you that there really are people who take their very particular, very obscure fields of study as seriously as that.

5. On the Families You Make for Yourself

Because my mother followed my father from New England out to the Canadian prairies, I did not grow up, as she did, surrounded by a large family. Instead, my mum set about building us a “found family,” who after 40-odd years are emotionally indistinguishable from blood relations.

For my beleaguered protagonists, whose families of origin are variously absent, dysfunctional, or both, I wanted something like that: to be loved and valued for themselves, and to learn to feel safe in relying on one another. Did I succeed? Well, you tell me.

I mean, nothing in real life can really prepare you for inventing an entire system of magic, yeah? But the components I used are all drawn from life: languages, lots of studying, obscure books, wishful thin

king, music, strong emotions, and a dollop of synaesthesia.

I wanted the magic of the Midnight-verse to be, if not commonplace, at least not occult – there’s no secret parallel magical society in this world – and to have both practical and intellectual factions, which,as tends to happen, would sometimes clash. I also wanted its benefits to have some counter-weight. I wanted magic to play some of the same roles in the world of the books that science and technology play in our own world. Finally, I wanted it to manifest in a variety of ways, some of them weird and unexpected – to the characters and, I hope, to readers as well.

Finally, a shout-out to all the friends and family members who helped me out with real-world things I also didn’t know, such as horse behaviour, Latin verbs, and fighting!

The paperbacks of The Midnight Queen and Lady of Magick are both available now, with A Season of Spells to follow on 19th October.