He Kills Because He Cares: Guest Post from author Peter Laws 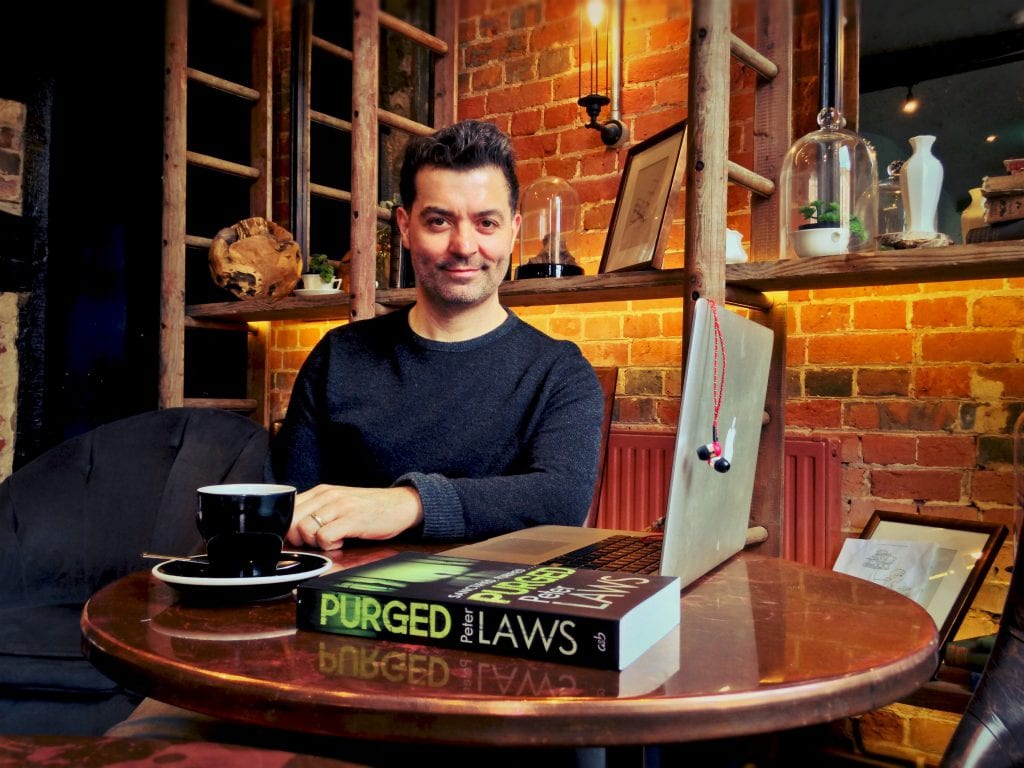 There are lots of ways to dispatch somebody. Guns and knives are incredibly popular, and efficient too, but let’s be honest: they’re a little passé. You’ve seen (or read) them a thousand times. Dropping a Steinway piano directly on the head of your victim is a lot more unique, but it’s a big investment and a nightmare to clean up. You could always poison somebody I guess, but you’ll need to swat up a lot on chemistry. Plus, I always worry I might accidentally take a swig myself, if the day was hot enough. So I have another idea. Why not baptise somebody to death? Don’t freak out, I don’t mean babies…I’m not a sicko. I mean people who are old enough to choose for themselves. Like twenty-somethings and pensioners. Why not baptise them and just bump them off straight after?

Okay, okay…before you call the poh-lice and get me arrested, obviously I jest, yet the killer in my debut novel Purged doesn’t see this idea as black humour at all. He uses baptism as a murder method, because he genuinely wants to see people purified for heaven and protected from sin. This means that his M.O. isn’t just unique in terms of methodology, it’s unique in ideology too. He kills because he cares. He thinks he’s helping. Of course to me and you, this guy is a complete fruit loop and thankfully the lead character in my book, Matt Hunter, is trying to help the police track him down. Matt’s an atheist ex-minister turned academic, who uses his theological expertise to stop religiously driven killers. It’s the first in a series, so expect more bizarre murder motivations to come.

But the idea for this first one came when I was in church, attending one of many church baptisms. I’m an ordained Baptist Minister* by the way, so I’ve either watched or helped dunk many people in the little hot tub pool that sits under the stage at church. From Goth teenagers and middle-aged doctors, to elderly couples who held each other’s hand by the side of the water. Now, don’t fret, I didn’t think of murdering these people during the actual act of these baptisms. That happened hours later, when my friend Ken joked that if we had a sniper in the balcony, we could pick of the baptised so that they went straight to heaven. He wasn’t serious of course, it was just a goofy joke…but his quip got me thinking. What if somebody actually did that.

Adult baptisms are powerful community moments. Many remark they’re one of the pinnacles of their spiritual life. They’re a lot less ritualistic and freaky than they sound too because, ironically, Baptists are sometimes accused of devaluing the ritual. Theologically speaking we don’t see the water as having super powers. A person isn’t evil before and cleansed after. It’s not a cosmic sheep-dip. It’s simply a nifty New Testament way for people to publicly, and powerfully, declare their faith in God. So it’s not magic. Baptism doesn’t make anybody a Christian any more than a wedding ring makes you married. They’re just symbols to the world. Powerful ones, but still just symbols.

The killer in Purged however, is obsessed with this ritual. He’s convinced it’s the only real way to save the world, even if he has to do it by force. I don’t recommend this method, incidentally. I don’t think faith ever works if it’s forced on somebody. It’s always voluntary and it’s one of the reasons my tradition doesn’t baptise babies. We prefer to let the child grow up and choose for themselves, if they believe in God or not. That’s their call, not mine. Yet still, the idea of baptism as a homicidal method of salvation was an interesting murder method to write about, and it’s a mode of killing that Matt Hunter is uniquely positioned to stop.

*Pssst…people hear I’m a Baptist Minister and assume I’m part of the same belief system as the Southern Baptists in America who outlaw women in authority, or Westboro Baptist Church who picket gay people’s funerals. But that’s about as far away from my thinking as killing people for evangelism!

Peter Laws is an ordained Baptist minister with a taste for the macabre. He writes a monthly column in the Fortean Times and also hosts a popular podcast and YouTube show which reviews thriller and horror films from a theological perspective. He lives with his family in Bedfordshire. Purged is his first novel.
peterlaws.co.uk
@revpeterlaws

You can also check out the official Purged soundtrack composed and performed by Peter himself here: https://peterlaws.bandcamp.com/releases

2 thoughts on “He Kills Because He Cares: Guest Post from author Peter Laws”