A unique mix of the comical, and the touchingly humane, this brilliantly perceptive novel sees a group of parents, trapped in middle-class stability, dealing with marriage, kids and their suburban life in very different ways…

There’s Mary Ann, a super-mom who is already preparing her 4-year-old son for Harvard and has her life scheduled to a T, including sex with her husband – every Tuesday at 9pm sharp.  Then there’s Todd, the handsome stay-at-home-dad – the one the other mothers admire in a silent Look-But-Do-Not-Touch fashion. He’s trying (for his wife’s sake) to pass his bar exam although he blatantly doesn`t want to be a lawyer, and in a desperate attempt to reclaim his youth joins a midnight touch-football team, and starts a passionate affair with Sarah. Sarah is a lapsed feminist who isn’t quite sure how she ended up being a traditional wife. She’s the kind of mother who (shock horror) is capable of forgetting her daughter’s snack, and in a moment’s rebellion dares to kiss Todd in front of the mother’s group.  Then there’s Larry, an ex-policeman whose wife has left him and who obsessively targets the local paedophile to vent his life`s frustration. And let’s not forget Sarah’s husband, Richard, a successful businessman who develops an obsession for internet exhibitionist Slutty Kay, and consequently spends more time inhaling her mail-ordered panties than with his own wife and daughter.

‘The cast is so real that book groups will have a blast comparing people they know
to the ones in the book. Suburban comedies don’t come any sharper’

‘Little Children is a greatly auspicious and instructive encounter with the dread world of maturity. Darkly comic, with a mischievous eye for absurd and intimate details’

‘Anyone who watches Desperate Housewives but wishes for a little more intellectual intrigue should lap it up, and those lucky enough to be familiar with Perotta should be impressed with the way he’s moved on and grown up alongside his Generation X-ers’

'Perrotta could almost be the physical embodiment of a Springsteen hero, who wants to both belong and not belong at the same time.'

Be the first to review “Little Children” Cancel reply 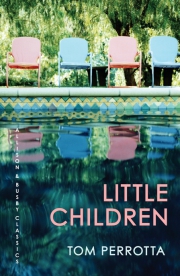