I’ll Take That One: An Evacuee’s Childhood

Kitty Baxter was born in London in 1930, the daughter of a road sweeper and a cleaner and one of five children. War broke out just as Kitty turned nine and she became one of thousands of children evacuated to the countryside. This would be the first of three times that she was rehoused far from home over the course of the war.

Be the first to review “I’ll Take That One: An Evacuee’s Childhood” Cancel reply 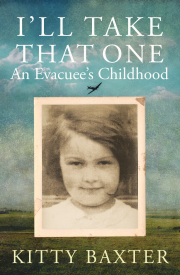