‘I rode on the stage in such style, that the men in front forgot I was a girl, and also forgot to laugh.’

Emily Soldene’s life spanned the entire Victorian era. As both leading lady and a formidable impresario with her own opera company, she was a darling of London’s music halls and theatre land, later reinventing herself as a journalist and writer in her fifties.

From humble working-class beginnings with the taint of bigamy, a star was born. Emily’s fiery ambition would see her counting the Pre-Raphaelite Brotherhood and Dickens as friends and mingling with the Rothschilds, Oscar Wilde and aristocrats. She even alleged that she had a close encounter with Jack the Ripper.

Charting her international triumphs and calamitous disasters, from taking Broadway by storm, befriending cowboys in the Wild West and touring the Australian outback, Helen Batten vividly recreates the era and a riotous life that has faded from the limelight. Putting Emily Soldene firmly back in centre stage, The Improbable Adventures of Miss Emily Soldene is a portrait of an irrepressible character who trod the boards, travelled the globe and tore up the rule book, often scandalising London in the process.

Be the first to review “The Improbable Adventures of Miss Emily Soldene: Actress, Writer, and Rebel Victorian” Cancel reply 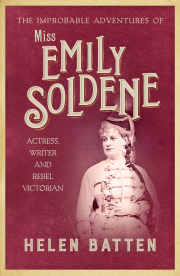