One bookshop. Fifty-one rules. Three women who break them all.

Bloomsbury Books has resisted change for a hundred years, run by men and guided by the general manager’s unbreakable rules. But after the turmoil of war in Europe, the world is changing and the women in the shop have plans.

The brilliant and stylish Vivien Lowry, still grieving her fiancé who was killed in action during World War II, has a long list of grievances, the biggest of which is Alec McDonough, the head of fiction.

Loyal Grace Perkins has been working to support her family following her husband’s breakdown in the aftermath of the war, while torn between duty and dreams of her own.

Fiercely bright Evie Stone was one of the first female Cambridge students to earn a degree, but was denied an academic position in favour of a less accomplished male rival. Now she plans to remake her own future.

As they interact with literary figures of the time – Daphne du Maurier, Samuel Beckett, Peggy Guggenheim, and others – Vivien, Grace and Evie plot out a future that is richer and more rewarding than anything society will allow.

‘A book lover’s dream.’ Sarah Penner, author of The Lost Apothecary
‘A timely and beautiful ode to ambition, friendship, bookshops, and the written word.’ Janet Skeslien Charles, author of The Paris Library

Be the first to review “Bloomsbury Girls” Cancel reply 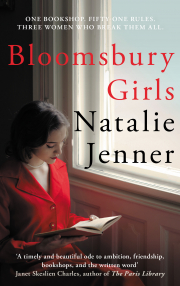