We Won’t Pick Up a Penguin

At the risk of appearing to write a politically-motivated blog, which is not my intention, I have decided to share an article featured on the BBC News website this week. It speaks of library books that have received the most complaints, one of the most recent additions being a tale of two male penguins that raise an egg together, ‘And Tango Makes Three’. 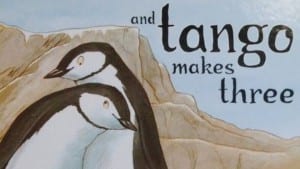 This book is accused of promoting a homosexual agenda despite the fact that it is based on a real-life story of two real-life penguins. Last time I checked, penguins weren’t prone to deliberately causing controversy through what we label as ‘homosexual’ behaviour. However, unfortunately this issue is still seen as an issue, and now penguins can’t be penguins. Sigh.