Swatting up on your Norman history

A while ago, my sole knowledge of Norman history centred on The Battle of Hastings – and namely on the simple fact that a) there was a battle, b) it was in Hastings, and c) it was in 1066.  That, and a very vivid memory of a primary school project where our class lined the school hallway with our version of the Bayeaux tapestry – each of us having to draw one section of it.  (I still have my section tucked in a drawer somewhere at home and can still remember finding the drawing of chainmail quite tedious.)

Anyway, since then my knowledge has somewhat improved… First, because I read Jack Ludlow‘s Norman trilogy – Mercenaries, Warriors and Conquest. It begins twenty years earlier in 1033, and follows the fascinating story of the sons of Tancred de Hauteville, who the author aptly describes as a ‘brood like no other’, in that they ‘managed to be so consistently successful, [and who] with such meagre resources to begin with, conquered so much and rose to such heights’. And then because I watched the BBC’s three-part documentary The Normans (first broadcast on BBC1 last year) and now being shown again on BBC2. If you’ve missed the first episode, Men from the North it’s available to view on BBCiplayer for one more day, and you can catch the second episode, Conquest, tomorrow at 7.00pm. The last instalment, Normans of the South will be broadcast on Saturday 3 Sept, 8.15pm. 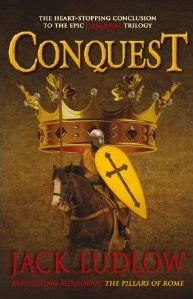 So just incase you are in need of some entertaining classes in Norman history, you know what to do. I, for one, would now make my school history teacher quite proud.

We are so EXCITED to announce our upcoming blog bl

Kitty Baxter talked to Witness History on the @bbc

The early bird catches the … err, fudge?! Sign u

COVER REVEAL! 📣 Bad for Good was the must-read

RUN TO GROUND, the brand new, gritty instalment in