Whilst the Guardian comments that one might be surprised by the huge figures some authors are earning, it is no real surprise that Forbes Magazine has just named James Patterson as the highest paid author amongst them. When I visited the States last year, I could have been excused for thinking Patterson was the only author published in the country. Ok, I exaggerate – but as I wandered through the U.S. airport, scanned my corner of the beach and browsed my hotel’s bookshelves – the ratio of Patterson to Other Author novels in sight was at least 5:1.

Patterson churns out his novels at breakneck speed and regularly releases books co-written with other authors – which many will criticise as a blatant attempt by lesser-known writers to jump on the Patterson bandwagon. And yet, I don’t see the problem with this. Why shouldn’t an already successful author help introduce his fans to other deserved novelists?  Sure, they could give a new author a nice quote for the back of their book – but nowadays that’s not enough to really reel in the fans. Co-writing a book with them surely gives the second author a more forceful stamp of approval (even if their name is far less visible on the book cover…). 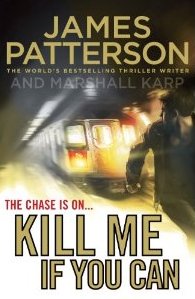 So I’m particular excited that Kill Me if You Can, by James Patterson and Marshall Karp (A&B author and writer behind the Lomax and Biggs crime series) will be out soon – on Kindle next week and in hardback and paperback in November. Now, I will confess to having never read a Patterson, but I HAVE read the first three Karp novels (The Rabbit Factory a personal favourite) and if you like fast-paced plots and wise-cracking cops then I suggest you help break the Patterson:Other Author ratio and take one of Karp’s novels on your next trip Stateside.
One can only hope that the new co-written release might help Patterson loyalists branch out a bit. And maybe the $84million he is reported to have earned last year, might get divvied up a bit in the future…