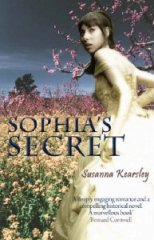 Sophia’s Secret, by Susanna Kearsley (published in the US as The Winter Sea) has won the RT Book Reviewer’s Choice Award for best Historical Fiction Novel for 2010, beating five other contenders including Philippa Gregory’s The Red Queen.

Also shortlisted for this award was fellow Allison & Busby author Lauren Willig for the latest release in her captivating Pink Carnation series.

This is by no means the first accolade the book has received. Sophia’s Secret was also shortlisted for the RNA Romantic Novel of the Year Award and selected by Woman & Home magazine as one of the 5 Best Ever Time-Slip Novels (together with The Time Traveller’s Wife, Labyrinth, The Return and A Secret Alchemy).

Susanna Kearsley‘s latest book The Rose Garden is out in May 2010.