In light of Birmingham’s main station reopening after a £750m makeover, the National Railway Museum in York is using its latest exhibition to celebrate the architectural styles from the past and the Golden Age of train stations.

Most of our current railway stations favour a futuristic design on the outside, with a bright and spacious feel inside. But this wasn’t the case in the mid 1800s as railway companies and planners wanted to create city gateways so the traveller would know ‘they had arrived’. 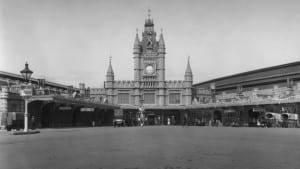 What followed were high arches, grand gates and tall columns; while they may not be as efficient at passing 10,000 passengers through its arches as its modern day equivalent, I love the classical feel, they are almost monument like in their grandness. You can see this for example in the cover to Edward Marston’s The Railway Detective: there is so much going on it’s almost an epic historical painting.

Which stations do you prefer? Modern or classic?