Last month saw the publication of a new collection of fairy tales: The Turnip Princess and Other Newly Discovered Fairy Tales by Franz Xaver von Schönwerth. But considering they were first recorded in the 1800s, ‘new’ may not be the best way to describe them… 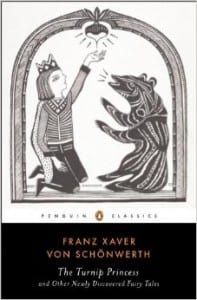 Franz Xaver von Schönwerth was a civil servant in Bavaria. He wanted to preserve orally told stories, so he set about recording them from many different people. These stories were hidden away in an archive in Germany for over 150 years. They were finally discovered in 2012.

The Turnip Princess and Other Newly Discovered Fairy Tales is published by Penguin Classics. The title story is about a prince who meets an old woman and a bear in a cave. The bear tells him to pull a rusty nail out of the wall and bury it beneath a turnip, and then he will receive a beautiful bride. If only finding love was so easy in real life!

These charming, yet brief and gritty tales, are wonderfully fun to read. It will be interesting to see whether this new book will make Schönwerth as common a name as Grimm or Andersen in the world of fairy tale literature.