Happy Year of the Dragon!

Yesterday, as I recently discovered, was the Chinese New Year. The literal translation of its Chinese name is ‘Spring Festival’, and so it marks the end of winter and the beginning of spring. I wish it was feeling like spring already, but I’m afraid it’s a bit early for it here in the UK!

Nevertheless, I thought I’d do a bit of Googling and find out about the Chinese New Year tradition – it’s something I know very little about. Did you know, for example, that the tradition is said to originate with the story of a mythical beast called the Nian? And that ‘red packets’ are traditionally given out at the New Year, which should only contain money in even numbers, as odd-numbered money is associated with funerals? I’ve always associated red with China, perhaps because it’s common to use red decorations and wear red clothes for the Chinese New Year – apparently the colour is thought to scare away evil spirits.

With its bright colours, fireworks and emphasis on lots and lots of food, it sounds like a good antidote to the January blues. Which is why I’m hoping to head into central London on Sunday 29th January, where the city will be holding its Chinese New Year celebrations. It includes a parade, a display by 100 performers in Trafalgar Square, and a fireworks finale, as well as some special and discounted food/drinks at local restaurants. And coicidentally, how apt that the following day we will be celebrating the official launch of Winging It, by Deborah Cooke (Book Two in The Dragon Diaries)! It is the Year of the Dragon after all… 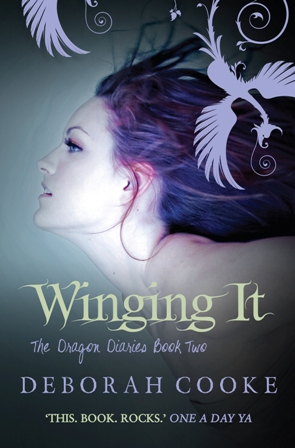