There are some covers which are lovely pieces of design in themselves, but don’t actually “sell” the book to the reader. One example I came across recently was the hardback cover to The Art of Fielding, by Chad Harbach. I had seen the book on a table in my local bookstore but it would never have occurred to me to pick it up. I actually thought it was a non-fiction book, and in fact (in those 2 seconds that your mind processes a cover when you scan a table of books) I had taken the title very literally (the image giving me nothing else to work with) and thought is was about an artist called Fielding. 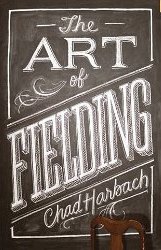 Since then however, I have heard great things about this novel and went on to read the blurb online which reveals it is a book about the friendship, commitment and ambitions of a group of college boys (and one boy in particular) with hopes for a career in baseball.

I’ve just seen the upcoming paperback cover, which is undoubtedly a more standard, more mundane design, and yet you immediately get a much better sense of what the book is about. There’s the young protagonist and the font for the title screams baseball now. Being a fan of such classic films as The Natural, The Field of Dreams, Bull Durham and A League of their Own, I definitely would have picked this up from that bookshop table that day. 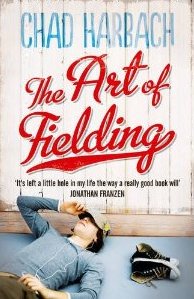 So, one could argue that because of the hardback cover, I almost missed out on what promises to be a good read (I’ll have to see for myself) and yet, if I do read it and love it and want to treasure it on my bookshelf or buy it for a friend, I would definitely go for the hardback’s elegant design.

So there you have it, the difference in the two editions. One to attract the impulse buyer, the quick purchase and produce big sales and the other which offers a more sophisticated look, that suggests this is a great classic to be treasured (once you know what it’s about…)