Unused to the London commuter routine I was blown away by the queue when I stepped off my train at Vauxhall and headed for the underground, the whole of one side of the entrance was blocked by people and overflowing out of the station. The other side had sensibly been left free for passengers leaving the station, but just as I was arriving someone broke the mould and headed down the empty side and just like that, others proceeded to follow. By the time I was halfway along the tunnel the other side was completely blocked and a sea of heads surrounded me, forcing exiting passengers to push their way through the crowds. 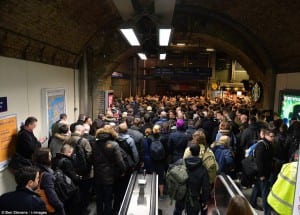 Whilst I stood compliantly in the queue I debated taking the empty side but decided against it, foreseeing the chaos that ensued. This made me wonder what it takes to drive someone to be the first person to step out of line when hundreds of people before them have restrained from doing so. Perhaps they have a hard-line boss who accepts no excuses for tardiness or maybe it takes a callous and impatient character.

What would you have done? Jump the gate or wait patiently for the crowd to ease?