I was sad to learn this morning that Robin Williams was found dead in his Californian home from what appears to be suicide. I grew up watching him and loved everything from Good Will Hunting to his stand-up shows. Not just a great comic, he was an immeasurable acting talent. 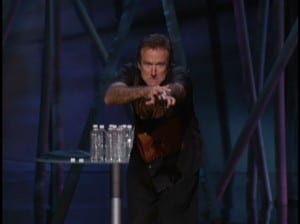 Nearly every year or so, my family would gather round and re-watch Robin Williams Live on Broadway. To me that was Williams at his best: an energetic thunderstorm of comedy and wit. What a clip of it here: Live on Broadway.

He will be missed.