THE HUNTED BECOMES THE HUNTER

Meet Parker, the ultimate professional. Parker is a master thief, and a man with a heart of steel. He believes in the oldest law of all – a life for a life. His one-time partner, Mal, tried to pull a fast one, making off with Parker’s share of the takings after a successful heist, as well as his Parker’s wife, Lynn. Big mistake. They thought they had left him for dead, but Parker survived their bullets and now he’s out for revenge and prepared to do whatever it takes. The prey has become the hunter, and now Parker is stalking them, leaving a trail of carnage in his wake.

Haunting and brutal, Point Blank was made into the cult classic movie starring Lee Marvin, and remains one of the most distinctive crime thrillers ever written.

'Whatever Stark writes, I read'

'Richard Stark is simply the best thriller writer of them all, including Chandler.'

'Richard Stark is one of the greatest writers of the twentieth century... His Parker books form a genre all of their own.'

'The nonpareil, the hardboilest of the hard-boiled, one of the darkest and best-loved names in all of noir.'

Be the first to review “Point Blank” Cancel reply 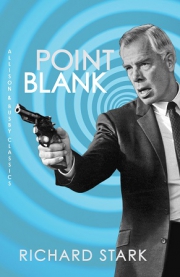