Rated 4.00 out of 5 based on 3 customer ratings
(3 customer reviews)
Category: Fiction
Recommend This:

This is the epic tale of one woman’s life – of her journey from poverty to notoriety, from the slums to the Forbidden City. Hers is a story of defiance and determination, politics and passion – this is her quest to become a heroine.

Becoming Madame Mao is a powerful novel tracing the story of China’s first lady from her youth as the unwanted daughter of a prostitute, her time as a struggling and later as a renown actress and ultimately her political downfall at the death of her husband. Evocative, poetic and mythic – Anchee Min’s book is an attempt to reinstate the position of Madame Mao, a woman who has been virtually written out of the history books.

This is a fascinating insight into the intimacies and psychology of the woman responsible for the Cultural Revolution. Hers is a personal life filled with rejection and betrayal from both family and friends – insecurities and paranoia ultimately prove to be accurate as Madame Mao’s world comes crashing down around her. 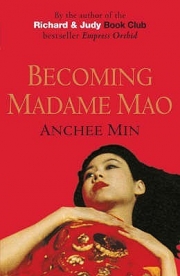