‘Beam me up, Scotty’: the novel as transport to another world – guest post by Sarah Hawkswood

As we’re now in the season of holiday reading, we’d like to invite you to getaway for a moment with author Sarah Hawkswood’s thoughts on escaping into a good book. Sarah’s novel Ordeal by Fire is published 22nd September and is available to pre-order now. 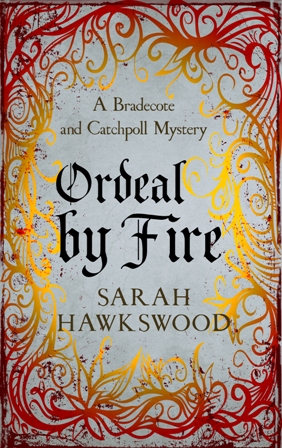 As a reader, I have always sought books which enable me to leave the reality of the here and now, and enter another time and geographical location. I never find ‘escapism’ a dirty word when it comes to fiction, because I see it as one of a book’s greatest attractions. After all, travel is expensive, and often requires good planning beforehand, but you can be a thousand miles away (or in a different universe), and in a different time period within a minute or so of picking up a book. What is more, you can do this and still have access to a good cup of tea! For this process to work, the world you enter must enfold you, not keep you as an interested observer on its periphery. The reader is not there to analyse but to experience.

What is true for me as a reader has been integral to my approach as a writer. In the early stages of a novel, when I am drafting the skeletal plot, working in arcs and themes, the process is almost clinical. I am effectively creating the parameters of the world in which I will be working. It may take a few chapters before I can step into the landscape and know the characters from first touching the keyboard each day. On the other hand, I have the broad brushstrokes of history already there as a background, and with the Bradecote and Catchpoll series I have my central ‘detective’ characters ready and waiting to step into action. I know exactly how they interact, and indeed how they will respond in any situation. It has even reached the point where, if I do not have a plot in which to set them off on the trail, I begin to miss them. They long ago ceased to be my own creation, and have developed a reality of their own, a reality in which their lack of actual corporeality is irrelevant. I know how they sound, look, move, think; dialogue between them is entirely natural, and its flow only limited by how fast I can type.

When it comes to writing Bradecote and Catchpoll’s twelfth century world, I am not attempting to give a history lesson, but the history is there, in little details, odd facts. Encumbering the narrative with descriptions of every little artefact and process would kill it as surely as a blunt instrument applied with force to a skull. I therefore use the broad brush of history, with highlighted details, just as a good photograph has a depth of focus and composition. As an example, since arson and fire are central to Ordeal By Fire, I could not ignore the facts of Worcester having already seen several devastating fires in the twelfth century before 1143, when the story is set. However, I did not need to give in depth explanations. I also apply the same technique to the landscape and domestic detail.

While I am writing I can see the scene, hear it as though going on around me, almost touch and smell it, but have the advantage of being able to wind back like a recording and alter things, much as occurs in creating a film. I also aim to fit the style of the narrative, and especially the dialogue, so that it settles into the period without sounding obtuse or archaic. The odd word of Old English as a highlight, and where context explains it, is not the same as writing in a ‘ye olde English’ style, which would be clumsy and false. The world has to feel real, not a ‘mediaeval experience’ pastiche.

Unlike a film, the reader is not entirely fed the images, but has to use their own imagination, and will actually see a slightly different rendition. The aim should be that every reader has their own version of Bradecote and Catchpoll’s world, but would recognise other variants because the core is strong. Having initially found the idea of everyone seeing what has been in my head in a differing way rather off-putting, I now relish the freedom it gives to the characters. As long as they have a reality, it does not matter if every reader’s Bradecote and Catchpoll are not exactly mine, or if their mediaeval townscape looks a little different. Readers of fiction are not passive; they use their imaginations, and that is part of the attraction of reading as an activity. As a wordsmith I feel I am informing, not instructing, inviting, not imprisoning. I want people to step voluntarily into the world I have created, and more easily than floundering through fusty fur coats and out of the back of a wardrobe into Narnia. It should indeed be as easy as teleporting. The good news is, the dilithium crystals CAN take it.