I recently came across an article about the writer Shelley Jackson’s Ineradicable Stain, a project which involves a short story being published on the skin of 2095 volunteers in the form of tattoos, with one word being ‘published’ on each person. The project aims to capture the mortal nature of both words and humanity, and brings unconnected individuals together through the art of a living, breathing story. 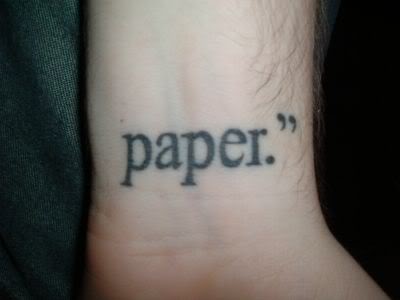 At first it seemed quite an alien idea that a story could be published through singular words, particularly in the form of tattoos, especially since it is never to be connected (is a story really a story if you can’t read it all?).

However, on further thoughts I decided that the concept of a story physically coming alive with the breath of the participants who carry its words on their skin is a very interesting one.

Perhaps in the modern world of technology and eBooks, where paper is seemingly going out of fashion (although the war between eBooks and paperbacks wages on), skin really could be the new ‘in’ thing…although you would need a vast amount of people to publish a normal length book! I can’t quite imagine reading A Clash of Kings by George.R.R.Martin (currently residing on my bedside table) along a lengthy line of people rather than through words on a page.

What do you think? Do we really need a story which physically lives? Isn’t good imagination and some old-fashioned paper enough?