Why I Pay a Licence Fee

Hoorah for the Beeb, who announced the details last week of their ‘Year of Books’ programming, and it looks like we have some corking programmes coming up. There’s the dramatization of Edwin Drood for one thing, which if it’s half as good as last year’s Little Dorrit will definitely see me tuning in.

Anne Robinson aside (can anyone actually say they enjoy watching her?!), I’m very much looking forward to My Life in Books. In amongst all my spam emails I’ve even fished out an invite from BBC Tickets to see one of three recordings of the show. I can never resist a good nosy through someone else’s bookshelves, and now the BBC are taking note with interviews from the great (e.g. P D James), the good (Sir Trevor MacDonald) and…Trinny Woodall.

Sebastian Faulks also features large in the programme highlights with both a series entitled Faulks on Fiction (click on link for sneak peeks) and with six-part adaptation of Birdsong. Following a slightly unsatisfied night at the theatrical production last year, I’m looking forward to seeing the BBC give this excellent book the scope and, fundamentally, the dramatic time it deserves. 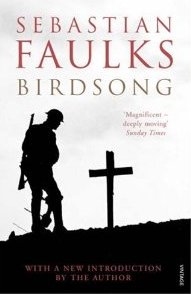