Wednesday Cover Story: The secret behind Every Secret Thing

How does a girl from a Northampton indie rock band end up on the cover of a Canadian author’s book? By chance? Or cosmic choice?

It is a question that has arisen following our reissue of Every Secret Thing – with a new cover below: 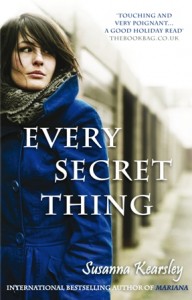 We settled for the photograph of this particular woman because she fit the image author Susanna Kearsley had in mind for her heroine, Kate.

Now some months later, we’ve discovered that the woman in question is indeed a real-life Kate! Kate Williams, to be precise – the singer in the indie rock band The All New Adventures Of Us (aka TANAOU). Even more interestingly, when we sent her a copy of the book, she happened to give it to her grandmother to read… In the book, Kate’s grandmother plays a crucial role in the story, and is married to a man named Ken. So it was a further surprise to get an email from Kate Williams exclaiming the uncanny coincidence that her grandmother too was married to a Ken.

To add to this uncanny mix, many of Susanna Kearsley’s other books involve characters who find their own lives are somehow linked to, or indeed mirror, the lives of someone in the past. Indeed, Sophia’s Secret, features a writer who seems to be channeling real past events in her novel.

So… is this all mere coincidence? Or was Kate Williams fated to be on the cover of this book? A sign of cosmic connections at work, and that, in this case, Kearsley herself has somehow channeled people in real life when creating her characters of fiction…?

I leave you to decide…

Want to flag up a cover you loved or hated for our Wednesday Cover Story? Write to chiara@allisonandbusby.com with your thoughts