Fire Across the Veldt is the upcoming new novel in John Wilcox‘s acclaimed Simon Fonthill series – which sees Fonthill recruited by British General Kitchener to Cape Town to fight the Boers.  And the cover is one of our new favourites. 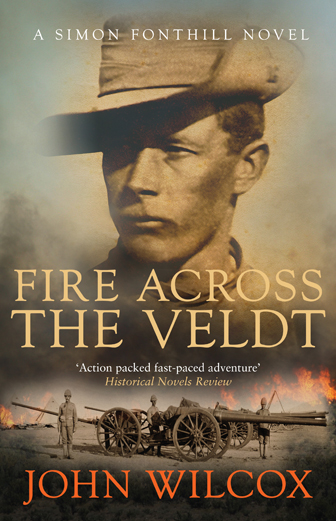 There’s something innately historical and quite beautiful about the colouring – the slight sepia and dirty blue tones. The design follows the style of the previous book in the series, The War of the Dragon, with the head shot up top and the more scenic image below. (I loved the last cover too, with that red head band popping out of the dark background – equally atmospheric as Fire Across the Veldt, whilst very different in colouring.)

But, more impressively, we must give extra kudos to our Art Editor, Christina, for not only finding such a striking and handsomely rugged male figure to feature on the cover, but more importantly, for finding such an historically accurate figure too. The man pictured was indeed a Victorian soldier, photographed in South Africa at the time of the Boer War.

It is a rare thing to find such a perfect match – a photograph that flawlessly fits both history and artistic design.  More often than not,  one has to manipulate images in order successfully evoke a certain historical era – ie. feigned historical accuracy.

As Christina herself put it: “Amazingly this image was historically accurate and not a cowboy from Wyoming…”

P.S. And tomorrow, we’ll have the pleasure of a visit by author John Wilcox, who will be popping into the A&B office tomorrow to sign over 100 of these Fire on the Veldt hardbacks!