This past weekend I watched Moonrise Kingdom on DVD. I am not a die-hard Wes Anderson fan, but I enjoyed the mix of odd-ball characters and the quirky charm of the plot which features the innocent romance between misfit Suzy Bishop (pictured above) and boy-scout Sam Shakusky as they attempt to run away together one summer.

In the movie, Suzy sets off to meet Sam carrying a few of her favourite items, including six books she’s stolen from the library (I’m not condoning this behaviour of course…). 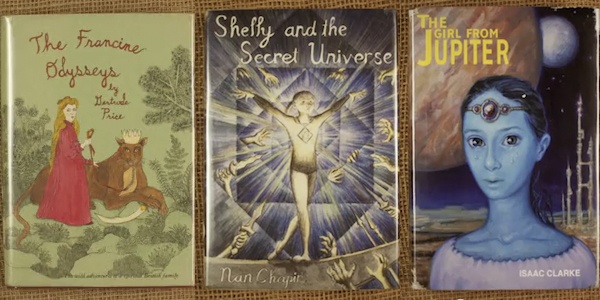 We see her reading aloud from three of them, the camera often zooming in on the creatively illustrated covers. And I caught myself wondering whether the books featured actually existed.

And I’ve since discovered that no, they do not. The books are completely fictitious and six artists were specially commissioned to create the cover designs. Even more interestingly, Anderson was so taken with the idea of the book passages and designs that he decided to animate the stories in a separate video. He conjured up text for the other three books that weren’t read  from in the film, and put together a piece which sees Bob Balaban (who also plays the narrator in the film) narrating animated sections from each of the books. You can read more about this and view the animated video here…

And here’s some added trivia about the books’ role in the film (which I came across on IMDB):  When Suzy is reading “Disappearance of the Sixth Grade” at the Mile 3.25 Tidal Inlet campground and continues onto “Part Two” after Sam says to read on, it is just about the exact midway point of the film: the spoken words occur at 46:59, with 46:56 left in the movie. This moment also marks the transition of the film’s plot, so Suzy’s “reading” also informs the audience of the shift in the movie’s tone and direction.

Well there you have it.