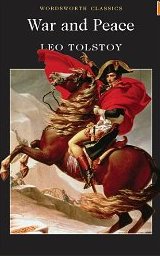 Being the observant little pumpkin that he was, Tolstoy could not help but notice the tendency of couples rendered asunder to recover from their sundering in very different ways. We consequently have Helene, abandoned by chubby hubby Pierre for her naughty adultering, demonstrating the importance of getting back on the horse asap. Her new horse being ambitious young Boris, former affianced of Natasha Rostov, last seen hurling himself about the battlefields; though I suspect, for Helene, any horse would do. For Pierre, recovery from a disastrous sledge-wreck of a marriage is a little less physical. As indeed is the whole tone of Book Five. For from here on in, War and Peace takes a turn towards the spiritualistic, with various of our male members seeking to haul themselves out of their unattractive self-pitying state by groping for the light.

First devotee is Chubbykins himself, who at the nineteenth century equivalent of a service station enters into conversation with a supercilious, shifty character, whose extensive knowledge of Pierre’s personal affairs would put any reasonably cautious – or generously trusting – person on their guard. Not our ‘intelligent’ Pierre though, no, he finds Mr Suspicious most impressive, as he does the fellow’s solution for the rather miserable time he’s been having of late, that being: join the club. Freemasonry. Personal purification, re-education, dedication to learning the Truth, etc, etc. As the Jehova’s Witness who recently came to my door will tell you, trying to recruit strangers to your cult is a thankless business.

With Pierre, though, Mr Suspicious struck lucky, for he absolutely adores the masons. The bit about standing blindfolded in a cupboard spooks him, certainly, but on the whole he thinks it’s marvellous, and he is all of a sudden invested with a new enthusiasm for life. No sooner has he forsaken his atheism and plucked up the guts to make it plain to papa-in-law Prince Vasili that he will not take Helene back (you tell him, Big P!), than he charges off to the countryside to do good by his serfs. What with the Russian feudal system being a little too complex to allow whimsical overnight transformations, Pierre does not, in the end, manage to pre-empt Emancipation by fifty years; but he thinks he does good by his poor peasants, and that is the important thing. So convinced is he indeed of his goodness and the goodness of his new way of life that he drops by on recently bereaved Prince Andrei to tell him just that, and gives him a patronising lecture on why Andrei’s life is so depressing (the deadness of Andrei’s wife not being answer enough). Good old Andrei though, having also shaken off the barefoot ‘God’s Folk’ cult hanging on drab sister Mary’s every word under the misapprehension she is entertaining, successfully remains a devout non-believer, thank God.

Equally grateful should readers be to the fact that one can’t keep Boney down for long, and at the end of book five we are whisked from piety back to war – but alas! It is the dreary, long hours of waiting and the idleness of campaigning that is our subject this time. So instead of gladly suffering fools charging through cannon smoke, we have to watch poor old Denisov being driven out of his wits as his men starve through a lack of supplies. Taking matters into his own hands, little Denisov commandeers another unit’s ration; a pretty little bit of borrowing that winds him up being court-martialled – or would have done, had he not been conveniently shot in the arm the day before his trial. So it’s not the prison, but hospital for Denny – much worse, surely? – where, after a period of loud righteous indignation, he eventually calms down enough to concede he is in a bit of a sticky situation. Denisov therefore dispatches Nicky Rostov, cunningly disguised as a civilian, to Tilsit to personally hand the tsar a plea for pardon; not the best messenger, perhaps, given that young man’s tendency to become love-struck and lose all sense of propriety and purpose in the thrill of his idol’s presence, but then, fictional characters will do the most peculiar things for the sake of a decent plot, and to wind Book Five (and, incidentally, Volume One), to an amusing close.

Read the next installment: Book Six