Doesn’t quite have the same ring to it, does it? However, an early manuscript of A Study in Scarlet shows its author still sketching out the names for what became the infamous duo, Sherlock Holmes and Dr Watson . This weekend I stepped behind the wall of books and into the world of Sherlock Holmes and his author, Sir Arthur Conan Doyle – a world that has been reinvented and remains as prominent today as it did two centuries ago. 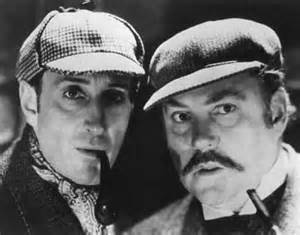 There’s a fascinating video of Sir Doyle talking about how he came about creating the detective – influenced hugely by his science tutor who used deduction methods in his experiments – a technique Sir Doyle thought should be applied to detection.

Original copies of The Strand magazine are on display where Sir Doyle’s short adventures were first published in the monthly editions, and where he soon became a star.

And if that’s not enough – there are walls covered with beautiful artwork, capturing the London scene in the late 19th century – a foggy London, where “only the all-seeing eye of the master detective can penetrate its thick veil to shed light on the crimes and mysteries of the metropolis.”

If you have not made your way down to the Sherlock Holmes exhibition at the Museum of London, you’re missing out!

Visit the Museum of London website for details about the exhibition http://www.museumoflondon.org.uk/london-wall/whats-on/exhibitions-displays/sherlock-holmes/