The Women’s Institute has launched a Love Your Libraries campaign to fight councils’ plans to close many libraries, replace staff with volunteers and cut opening hours.

It is now asking its members to sign up to their local library, to write to their local council sharing why they value the library’s services and explaining its importance within their community and to sign a petition in light of David Cameron‘s pledge that we would hold a debate on any petition with over 100,000 signatures. 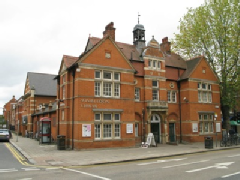 A friend of mine has just recently moved to London, just down the road from me in Wimbledon, and so just recently discovered our lovely Wimbledon Library whilst exploring the neighborhood. She signed up, and is already singing its praises (she was particularly impressed with the new machines they’ve got which allows you to take out and return books with such ease – by merely scanning the bar codes yourself using these self-service machines).

I have long since been a member but it had always frustrated me that their 9am to 5pm weekday hours meant I could never venture there on a work day.  So was thrilled to hear that, far from cutting their hours, they have now extended them to 7pm.  But it is clear that we Wimbledon locals are very lucky, and my friend’s fresh enthusiasm for the place as well as the WI campaign has served to remind me of this. And I look forward to making the most of this Wimbledon luxury.

What I love about my library? Having a quiet place where I can sit and work in the company of others around me busy studying or researching a paper (without having to pay for a drink or listen to the constant sound of coffee being ground in the background…)

What do you love about your library?