After watching a cringy, yet hilarious episode of Come Dine With Me, I began thinking about dinner parties. I often have friends round for dinner but I wouldn’t go as far to call it a dinner party. It’s not quite as refined as that. More fajitas and margaritas, than canapés and champagne. But that got me thinking about how fun it would be to host a lavish dinner party and more interestingly, who I’d invite.

And if I’m going to theorise, I might as well go all out. I think the menu would involve scallop starters, then paella followed by a lemon cheesecake. (It’s nearly lunchtime okay?). If I could invite anyone, dead, alive, fictional or real, I think I could narrow it down to:

Stephen Fry, Sherlock Holmes, Miss Havisham (Because everyone needs an eccentric spurned old lady dressed in white), Jay Gatsby, Elizabeth Bennett and Dorian Gray. In my mind we would look like this: 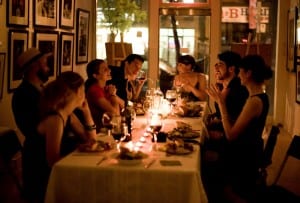 I imagine all these characters plus Stephen Fry would make a wonderfully interesting evening. Dorian would try and woo Elizabeth, Elizabeth would outwit Gatsby, Gatsby would charm Miss Havisham and Sherlock would dazzle with his logical assumptions, while Stephen could administer intellectual conversation. It’s a shame all but one are fictional characters!

Who would you invite to your dinner party?