Karla Sorensen used to be big in horror films. In the Sixties and Seventies no self-respecting low-budget bloody schlocker shocker was complete without the Queen of Vampires presiding over it. She was well-qualified; after all, at the age of ten, she sold her soul to the devil.

Now, although spookily ageless, Karla is knocking on in years. Her residuals are drying up and she needs some cash, so she decides to return to the north of England, to Manchester, to appear in Menswear, Britain’s most risqué TV soap opera.

But not everyone’s happy about her return to the fame game. Menswear’s current star is Lance Randall, the famously sexually confused heart-throb, and he’s furious to hear that Karla is about to become his co-star. He hates her, he fears her, and he’s convinced that she’s come to steal his very soul. Dark clouds are massing around town – and deep, dark, devilish secrets are about to be unleashed . . .

Be the first to review “To the Devil – a Diva!” Cancel reply 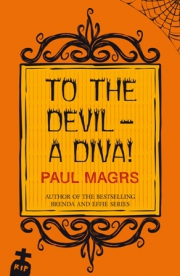