Elliot Grubman is in trouble. One year ago he was worth over a hundred million dollars, earned from Swagbelly – ‘the magazine for today’s gentleman’. He had everything in the world – a wife, a young son, and a five-story New York townhouse. Now he’s divorced, his boy won’t talk to him, and he lives alone in a rented flat. Even the attentions of six-foot-tall, blonde, huge-chested glamour models aren’t enough to ease Elliot’s lonely passage through middle age.

What Elliot really wants is to make his mark, to prove to the world that he is a mensch. He wants respectability.Yet playboy Jewish pornographers are not exactly what America’s top country clubs are hankering after – and Elliot finds the barriers slamming down in front of him at every turn.

As he tries to crack the frosty ranks of the polo-playing, old money elite, and stop his son from converting to Catholicism, it seems Elliot may have traded away too much for his wealth. And when one of his Swagbelly girlfriends springs another unwelcome surprise on him, it is almost too much for Elliot to bear …

Be the first to review “Swagbelly” Cancel reply 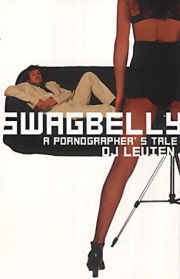