Series 5 of Blue Murder (based on the books by Cath Staincliffe) is back on ITV with Caroline Quentin reprising her role as DCI Janine Lewis. Catch the show for the next six weeks, every Monday at 9pm (from 7 Sept – 12 Oct). 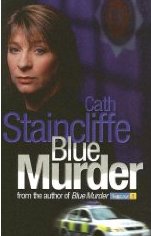 Series 5 of Blue Murder is back on TV, with Caroline Quentin reprising her role as DCI Janine Lewis. Catch the show for the next six weeks, every Monday at 9pm (from 7 Sept – 12 Oct). All the episodes will be available to view online 28 days after it airs – so if you missed the first episode, watch it here.
The TV series is based on the books by Cath Staincliffe which include Blue Murder and Hit & Run and, as always, Cath has worked with the writers on the show and written one of the stories for the new series.

For more information about the series, including the cast and interviews and any subsequent episodes, click here.