I’m not sure a piece about all the different and bizarre things Londoners died from in the 17th Century is quite in tune with the Christmas spirit, but one bit of news hitting the papers today is a new exhibition at The Royal Society displaying various books that have never before been on public display. And the particular book to has captured the press’ eye (whoever wrote the press release obviously understood our odd attraction to the slightly morbid) is John Graunt’s pioneering 1679 work of medical statistics and observations, based on the recorded causes of death of Londoners in the 17th century.  Not the jolliest of reads, I’m sure, although undoubtedly eye-opening. Not least because you might think twice now before shouting ‘Boo!’ at an unsuspecting victim, seeing as in 1660 at least nine people perished from being ‘frighted’.

However, what caught our eye, and that of the Daily Mail, was that many Londoners died from ‘The King’s Evil’ (also known as scrofula) – a skin disease and swelling of lymph nodes on the neck, which at the time was believe to accompany the coronation of kings and could only be cured by the touch of a monarch.  This immediately brought to mind the first book in Edward Marston‘s acclaimed Restoration mystery series, called, in fact, The King’s Evil. Set in London in 1666, this particular passage from the novel mirrors today’s news story: 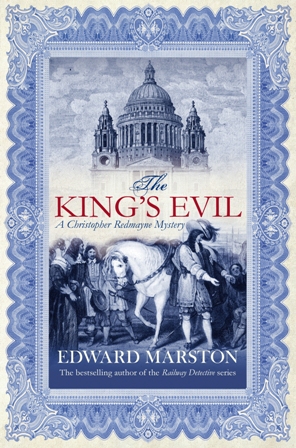 ‘They say that the King’s Touch can cure any disease… Most of those who will go before His Majesty are stricken with the King’s Evil, as they call it. Scrofula. A cruel disease. It can turn a beautiful face into vile ugliness. I have seen men whose skin looked as if they have been flayed alive and some have been so stricken that they went blind.’ He drank some more beer, then belched.
‘Have you ever seen anyone with the King’s Evil?’
‘Oh, yes!’ said Jonathan ruefully. ‘Indeed, I have, my friend. I have seen a whole city afflicted with it.’
‘A whole city? What is it called?’
‘London.’

It is perhaps also pertinent to note that Marston’s novel, which sees architect Christopher Redmayne and constable Jonathan Bale investigate the death of Sir Ambrose, also clearly demonstrates that another frequent cause of death in London in the 17th Century was, of course, foul murder.