A tribute to translators

Today I saw the longlist for The 2011 BTBA Fiction Longlist.

I am lucky in that I know four languages – the perks of coming from an international background (or, how my other-half ‘endearingly’ puts it, “being a mutt”). And I do love languages, all with their own unique rhythms, inflections, tones and expressions.

So I am truly grateful for the luxury of being able to read, say, a Spanish novel, in its original form, experiencing the full flow and nuance of the language which may have been lost in a translation. And it is also why I have a huge amount of respect for talented book translators – whose job it is to battle with the differences between two languages, whilst retaining the essence of the original narrative and author’s writing style, which lies at the heart of the book’s success. It is indeed a true talent.

Just by comparing the translated titles on the list with the original titles can highlight how tricky a feat it can be.  Granted, translating Los Minutos Negros into The Black Minutes is pretty straightforward, but things are rarely that simple. 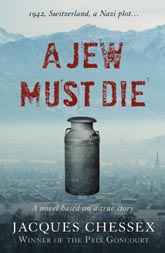 Take the French novel by Jacques Chessex, orginally entitled Un Juif pour l’exemple, which has been translated by Donald Wilson to a distinctly more brazen title, A Jew Must Die. It is a clear case of where the more beautiful subtleties of expression in a language is lost. The phrase ‘Un Juif pour l’exemple’ implies the punishment of a race through one man, without needing to spell out the words “punishment” or “die”. However, to have used a more literal translation ‘A Jew as example’ would not have evoked the same power in its meaning, nor have the same ring to it as a title for a book. Basically, Wilson knows what he’s doing. (Not to mention we Anglophiles are probably used to bolder titles and covers – compare this picture to the more subdued French cover here.)

I also was interested to see that the publishers felt the title Bad Nature, by Javier Marías (the literal translation to Mala Indole) might not have been enough to attract an English/American audience so they opted for an extended title Bad Nature or With Elvis in Mexico. (It works – Elvis? – I’m intrigued).

So, anyway, I thought I’d end this week with a little tribute to these translators who allow us to discover new writers from around the world, and thus broaden our reading horizons.

One last comment. A question, in fact. There are seven novels in French on the longlist, five in Spanish and four in German. The remaining eight titles are from authors writing in Afrikaans, Arabic, Croatian, Hebrew, Norwegian, Polish, Czech and Swedish. A nice range. But should we gather from this that the French-language novelists are leading the pack in talent, or merely that we have better French to English translators in our midsts?  Food for thought…

3 thoughts on “A tribute to translators”