On my usual route home via Waterloo, I passed Sleeping Beauty somewhere between Platform 9 and 10. And I mean that quite literally. Propped in the middle of the bustling station was a plush bed, with a very real sleeping beauty comfortably esconced under the covers. 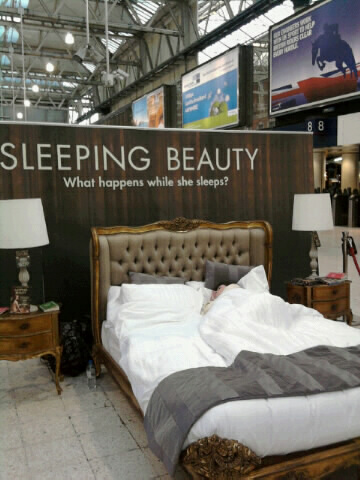 It was all part of the promotion for the upcoming release of the new Sleeping Beauty DVD, but I’m sure the resounding thought passing through the minds of every tired commuter who took a moment to watch that ‘belle dormant’ snuggle further under the duvet, wasn’t: “I must buy that DVD now”, but more on the lines of: “Boy, do I wish I had that job…”

My curiousity was piqued (how did she land that heavenly role?) and, after a quick Google this morning, I discovered that said sleeping beauty was an actress (she did played a very convincing sleeper…) who had won a competition for £1000 to lounge in bed for 12 hours.

Now, it’s hard enough to mentally pry yourself out of bed every morning without the knowledge that there’s someone who is getting paid a grand to have a duvet day.  And really, I think Revolver Entertainment missed a trick here – I’m sure there are plenty of stressed-out Londoners who would have happily done it for a fiver.