Zoë Sharp’s story Served Cold has been nominated for the Short Story Dagger this year. 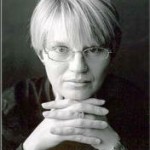 The CWA Dagger Shortlists 2009 has now been announced and we are proud to say that our very own Zoë Sharp has been nominated for the Short Story Dagger for her story Served Cold, which features in The Mammoth Book of Best British Crime , edited by Maxim Jakubowski (Constable & Robinson).  Zoë is the author of the acclaimed thrillers featuring female bodyguard Charlie Fox, including Second Shot and Third Strike (out in paperback this month). She is up against fellow crime authors Peter Robinson, Lawrence Block, Laura Lippman, Sean Chercover and Chris Simms.

Last year’s Short Story Dagger (2008) was won by Martin Edwards (author of our popular Lake District Mysteries) and in 2007 it went to Peter Lovesey with his short story Needle Match, featured in our Best British Mysteries IV collection (also edited by Maxim Jakubowski)  so we’re hoping to add Zoë to our list of winners!

Other A&B authors to have won Daggers:

You can see the full list of the Dagger Shortlists here.