I will be interested to listen to today’s discussion, Doctors in the Dock, on BBC Radio 4’s programme Face the Facts (will catch it later on bbciplayer). It centered around the question: Is the General Medical Council the right organisation to regulate the medical profession? The plan to instate an independent regulator to discipline doctors has just been scrapped by the Coalition even though this was a key recommendation drawn up by The Shipman Inquiry. And apparently there are many more reforms recommended by the Inquiry that are still being ignored by the GMC.

As I’m sure most of you know, The Shipman Inquiry was launched after the horrific and shocking discovery that Dr Harold Shipman was in fact a serial killer, preying on unsuspecting elderly patients, and his murderous actions went undetected for years. He may be an extreme case, but with continuous stories in the papers about medical negligence, complaints against the NHS, and practitioners being struck off the register (rightly or wrongly), it leaves one feeling less than confident with the system. 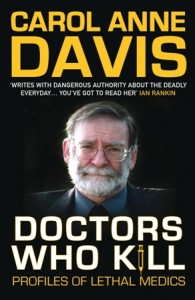 My extra unease could partly be due to the fact I’ve been reading Carol Anne Davis‘ latest book Doctors Who Kill (available in hardback, and out in paperback in April 2011). I now realise that Dr Harold Shipman, whilst perhaps one of the most notorious medical murderers, is not as rare a case as I would have hoped. In her book, Davis provides a substantial list of cases involving killers in the medical profession – from bogus surgeons, to nurses to paramedics to even dentists.  Her in-depth profiles of these killers (including Shipman himself – from his sad childhood and addiction to pethidine to how he got away with his murders) and her analysis of the reasons behind their killings makes for fascinating reading, but it certainly puts an uncomfortable spin on the old adage: ‘Trust me, I’m a Doctor’.