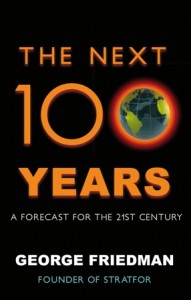 Am sending this book off to print – hurrah!
Some people are reactive, others proactive. I’d like to think I plan my life but I have a sneaky suspicion quite often it’s more a case of life happening to me.
George Friedman is clearly someone who thinks ahead and this book is the most riveting, mind-boggling and scarily convincing title I think I’ve ever read – and more than likely the reason it graced the New York Times bestseller list for a few weeks.
Some dismiss Friedman’s claims as crystal ball-gazing while others base serious financial and economic decisions on his predictions. Granted there are some very outlandish sounding ideas, but then if you were living in London in 1900 when Europe was enjoying great prosperity, would you have believed that a world war was imminent?
And after the First World War and the strict peace treaty that was imposed on Germany, one could be forgiven for suspecting all was safe, that Germany would never again rise to that level of power, right? But then along came Hitler and etc etc. The point is that the unexpected is always possible and in some cases more likely.
I’m always amazed and sceptical of broadcasters’ claims that of course we’d seen this all coming: the recession, terrorism, Jonathan Ross’s blip from grace, 80s fashion revival etc.
In The Next 100 Years (out on 27 July) there’s no predicting Kate Moss’s next outfit, but there is a thought-provoking and cleverly backed up argument for the next reign of superpowers, the most likely countries to go to war and the environmental implications of new technology. Friedman knows his stuff and he’s convinced me. I’m watching Mexico’s rise as an important world power – who knew?