I’ve been getting prepped for the BBC’s season of Shakespearean history plays which kicks off this Saturday. The Sky+ is set just in case and lord help the other half if he wants to watch something else. There has been a great deal of attention paid to the casting, which reads like a who’s who of British stage and screen. The name that jumped out for me though had to be Simon Russell Beale who’ll be playing the ‘fat-witted’ Falstaff. Having seen him play Malvolio in Twelfth Night and as Vanya in Uncle Vanya, I’m anticipating a wonderful combination of comedy and pathos. 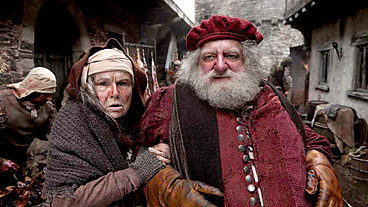 And with perfect timing we’re readying our ebook editions of The Late Mr Shakespeare and Falstaff, so to whet you appetite here’s a short passage from Falstaff that goes straight to the heart of Hal and Falstaff’s relationship as well as the trailer to The Hollow Crown – enjoy!

‘He was in the days of his youth a diligent follower of idle practices, much given to instruments of music, and one who, loosing the reins of modesty, though zealously serving Mars, yet fired with the torches of Venus herself, and, in the intervals of his brave deeds as a soldier, wont to occupy himself with the other extravagances that attend the days of undisciplined youth.
[…] And, allowing for monkish reserve, it gets Hal about right.
I mean: I recognise in that description the lad who was twice sick in my hat.’