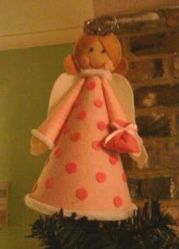 It might be verging on the ludicrous, but my hubby and I were arguing the other night over whether the creature perching on the top of our Christmas tree was an angel or a fairy.
Don’t get me started, but I have been subsumed into the Crooks tradition that only an angel/fairy on top of the tree will do. Stars, Santas; he laughed in my face at the mere mention of them as unworthy. Unfortunately angels/fairies must not be in as much favour elsewhere as there were scanty pickings as we were picking up the decorations.

So back to the angel/fairy debate. Point one – she has a sparkly halo – obviously angelic. Point two – benign but slightly stupid expression. Not quite the awe-inspiring features you might get with a heavenly host. Point three – an outfit that I would have thought neither a self-respecting angel nor fairy would have been caught dead in. She makes me think of Mr Blobby…