Paul Klee at the Tate Modern 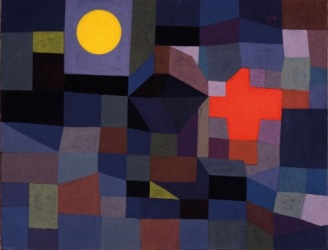 The Paul Klee exhibition at the Tate Modern from 16th October to the 19th March 2014 is a celebration of the artist’s life and works as has never been seen before. The largest collection of his work ever gathered under one roof, it takes a good couple of hours to get round the 17 rooms (depending on how cultivated you’re feeling that day, of  course!) and a fair amount of stamina…

I found, though, that as the style of Klee’s work varied, sometimes dramatically, from room to room, there was plenty to hold the attention of a bustling Saturday crowd, and a new favourite piece was revealed in each room. As the handy information booklet reads, Paul Klee’s teaching on art became enormously influential. He ‘usually worked on a small scale… using watercolour and other fragile media, with an intricate attention to detail that repays careful contemplation’ (I rather felt like my school Art teacher was standing over me at this point). Klee was one of the most important artists of the early twentieth century, whose reputation was established during the inter-war years.

Perhaps, for Klee, this period of political and personal unrest provoked his constantly evolving style – I use the word evolving as it is clear how one work might have emerged from another: techniques are tried and tested and build to later works. Also noticeable, however, was how the ‘most important artist’ had influenced painters and particularly illustrators of our generation; how their own approaches owed a nod to the great Klee.

A game of “spot the style” began, as springing out from Klee’s work I found characters not dissimilar to those portrayed by the British cartoonist, Ralph Steadman, and the fantastic Quentin Blake. 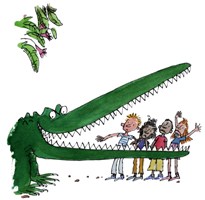 Klee explained many of his works as ‘curious adventures’, ‘conceived for unexpected characters’ and they certainly seemed to be telling wonderful stories. The surreal Battle Scene from the Comic Fantastic Opera ‘The Seafarer’ (above) was one that held my attention a while longer than others – the sea-monsters reminiscent of absurd and fantastic characters from many of my favourite children’s books.

Can you spot Klee’s influence in any of your favourite illustrator’s work?