Incoherent notes from the past – what could this possibly mean?

Have you ever jotted down some notes on a piece of paper, which made perfect sense to you at the time, only to find, when you look at the notes at a later date, they’ve lost all meaning?  I’m sure I’m not the only one.  But usually, after wracking our brains (and memory) for a bit, we can usually decipher the notes and remember what they referred to.

However, last week, whilst undergoing a major clear-out of papers and old files (our server was down, so it seemed as good a time as any) I came across this extremely peculiar page of lists… 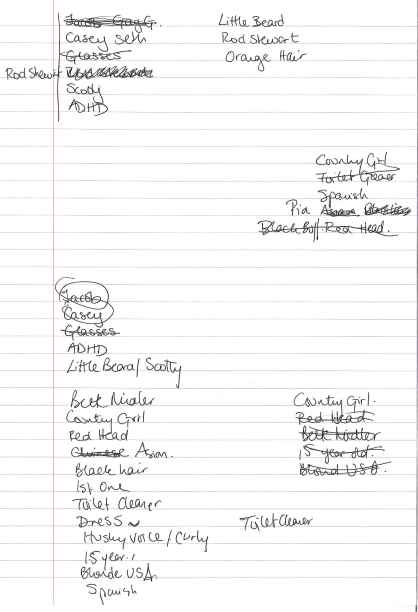 Now, as lists go, I think you’d be hard-pressed to find more random jottings. But there clearly seems to be some logic involved seeing as the separate lists repeat certain words…although I can’t even begin to understand the correlation between Rod Stewart, ADHD, Little Beard, Bette Midler and Toilet Cleaner. You’d think the meaning behind something as bizarre as this would be easy to recall, but instead the mind boggles.  This is apt to keep me up at night (like that MENSA test that was circulated over email some time ago). So if anyone is able to somehow decipher a meaning behind these jottings, or at least fathom a guess, do put me out of my obsessive misery.

What do you think they could possibly refer to??