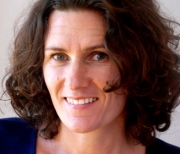 LEHLA ELDRIDGE was born in England and has worked as an actress, illustrator and waitress, amongst others. Having trained as an actress in London at The Guildhall School, she was awarded a scholarship in 1995 from Twentieth Century Fox to work with various theatre companies around South Africa, and has taken a theatre show to the International Theatre Festival in India.
As a cook, Lehla has spent a significant part of her life in and around kitchens, starting at the age of 14 in a pub kitchen, moving on to London cafés and catering at her father’s summer art schools in Italy, where she learned much about Italian cooking and the art of cooking for large numbers. She spent many years living in Cape Town but now lives in Devon and runs Lovely Things For Wonderful Women.