Who Let the Dogs In?

Molly Ivins is one of the wittiest columnists in America today and is back with her own personal Hall of Fame of America’s most outlandish politicians; the wicked, the wise and the witless drawn from more than thirty years of reporting.

Who Let the Dogs In? takes us on a wild ride through two decades of political life, from Ronald Reagan, through Big George and Bill Clinton to the current top dog, known to Ivins’ readers simply as Dubya.  But those are just a few of the political animals who are honoured and skewered in this volume. Ivins also writes hilariously, perceptively, and at times witheringly of Dick Cheney, Donald Rumsfeld, H. Ross Perot, Ted Kennedy, Nancy Reagan, Richard Nixon, Al Gore, and the current governor of Texas, who is known as Rick ‘Good Hair’ Perry.

Following close on the heels of her phenomenally successful Bushwhacked, Molly Ivins’ latest will be snapped up by anyone looking for comic relief from the political mess in Washington.

Be the first to review “Who Let the Dogs In?” Cancel reply 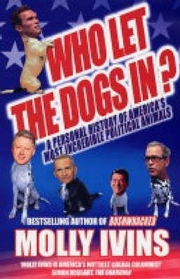