So Horrible a Place

When Patrick Gillard resigned his commision as Co-ordinator of Defence Studies at Camberly army staff college, his wife Ingrid Langely was more than a little concerned. Out of the blue, the perfect project for Patrick turns up. Patrick is recruited as a techinical advisor to the UK shoot of a big budget Hollywood blockbuster, Blood & Anger.

Based on a controversial, best selling book about an undercover operation in Northern Ireland that went spectaculary wrong, the film starts hot young British talent Rik Harrison as a world-class assassin. However, after an indulgent spell in LA, he is less than in shape for the role. So when Harrson`s stand-in is taken out of action in shocking circumstances, Patrick is asked to step in for the action sequences not covered by the stunt-man. Ingrid, doing some background research on the project, is concerned to find that the author of the book died in suspicious circumstances and when the scriptwriter too is found dead it is obviously not an unfortunate coincidence…

Be the first to review “So Horrible a Place” Cancel reply 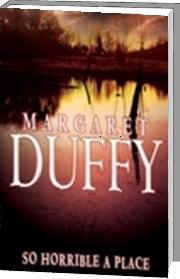