How could you get one of the world`s most famous criminals out of his hiding place in Rio? And once he was out, what would you do with him? And what if it all went wrong?

Kidnapping Ronnie tells the true story of the abduction of the notorious Great Train Robber Ronnie Biggs from Brazil in 1981. It is one of the most spectacular capers in British criminal folklore, involving a world famous criminal, a group of former soldiers, and the shadowy world of British intelligence.

For the very first time, one of the key members on the snatch team and the “mastermind” of the mission, Patrick King, relives his experience and spills the beans on the most audacious kidnap attempt in recent times.

The book includes eye-witness accounts, extracts from diaries and the getaway-ship’s log, photographs and stills from exclusive 8mm footage shot before, during and after the mission. It also features exclusive accounts from two other members on the kidnap team, Tony Marriage and Fred Prime who have never before spoken publicly about the mission.

An intriguing and page-turning read, Kidnapping Ronnie stands out not only as an exciting adventure but as a thoroughly researched document with a topical and journalistic edge.

‘Tells the complete story from both sides – a story as thrilling as it is unbelievable and one that has been waiting a long time to be told. The wait has been well worth it.’

“One of the most renowned capers in British criminal folklore, involving a world famous criminal, a group of former soldiers and the shadowy world of British intelligence”

“For the first time, the mastermind behind the mission tells it like is was, spilling the beans on the most audacious kidnap attempt in recent times”

“In his new book, Patrick lifts the lid on the kidnap attempt”

Be the first to review “Kidnapping Ronnie” Cancel reply 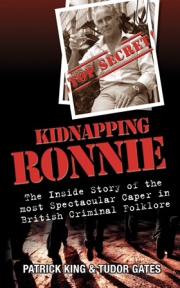