‘Christabelle Lang? She can’t still be alive.’ She is and, forced out of her self-imposed exile through the unwanted attentions of James,a young art historian eager for her reminiscences, Christabelle relives the memories of her life as a painter during Fitzrovia’s colourful heyday between the wars. However it isn’t Christabelle James is interested in, but the ebullient, egocentric and now fashionable artist Barney Copeland. Christabelle had a stormy affair with him but was abandoned shortly after she bore him a son. Now, as then, she is forced to dwell in his shadow. But through her strength of personality and the vigour of her own work she brings about a sea-change in James’s perceptions. Perhaps, at the end of her life, a recognition and acknowledgement will finally be Christabelle’s.

A compassionate study of youth and age, Choosing is the moving story of a woman whose independent intelligence and will to succeed triumph over adversity.

Be the first to review “Choosing” Cancel reply 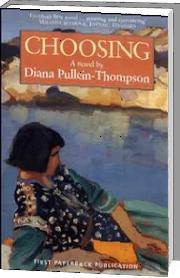